Why is American Football Called Football? Someone once made the mistake of wondering out loud in the presence of some British friends why we call our football “football.”

One of the chaps piped up, “Because you’re dumb Americans!” Now, I’m not a rabble-rousing, rebel yelling, flag-waving jingoist, but I’ll be gosh darn hornswoggled if I’m just going to stand there and let a bunch of Brits besmirch Uncle Sam.

I put on my best silky voice and drawled, “We got to the moon first. We gave you assembly lines, video games, mobile phones, crash test dummies, traffic lights, personal computers, lasers –”

“Alright, alright,” begged my friend. “You’ve made your point. So tell me, clever clogs, why do you guys call American football, ‘football’.”

I’m ashamed to say I didn’t know, but, gosh darn it, apple pie, “life, liberty, and the pursuit of happiness,” I certainly know now! 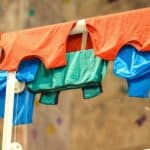 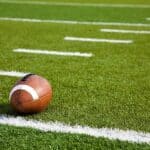 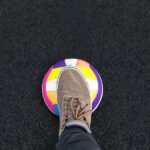 Why is American Football called Football?

American football gets its name from Rugby Football, its direct ancestor. Therefore, the sport does not get its name because players kick the ball with their feet. The game of football was never solely a kicking-only game. There have always been types of football where the players handle the ball. 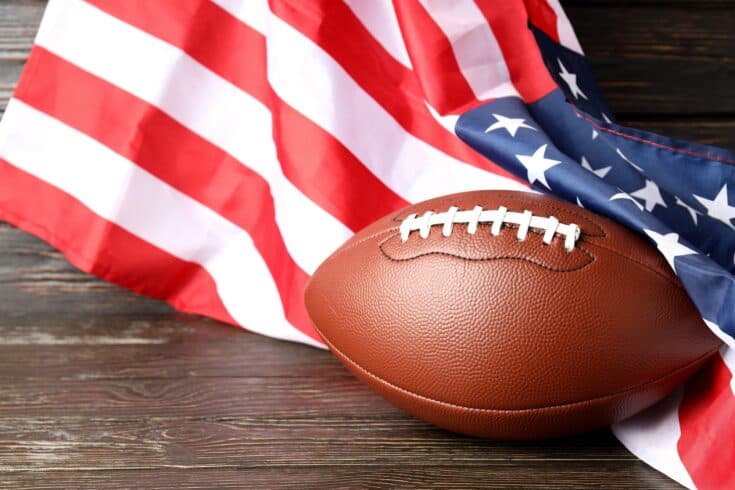 Why Is American Football Called Football?

The Antecedents of American Football

The easiest way to unravel the puzzle of our sport’s name is to understand where it came from.

Unlike, say, baseball, the game did not spring up overnight from the feverish imagination of some inventive genius.

Instead, it grew, like some Darwinian wunderkind, evolving through various earlier formats to overcome challenges and morph into its present-day form. 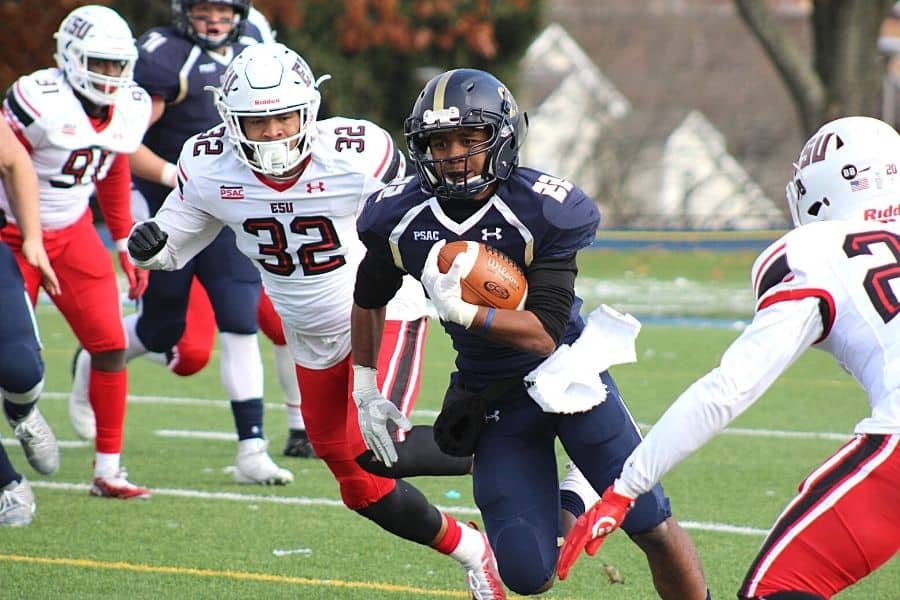 Football was a Riot

Ironically, American football can trace its origins back to football – and I’m not talking about soccer either.

Back in the day, by which I mean in those far-off and not necessarily lovely days of 12th-century England, boys and men played games that in hardly any respect resembled what today we’d call “soccer.”

The lads in those days were a hardier, sturdier, and more brutal folk than the modern set of lamentably weedy Y-chromosome carriers.

Therefore, the games I speak of were far rougher and much more violent, often resulting in quite a considerable injury.

This, even though 911 was a local barber with pitiless knives, zero anesthesia, and a lack of personal hygiene, or a wizened hag who would probably tell you to urinate on your injury and suck it up like a real man.

When I say these games were violent, I’m not kidding. These football forerunners involved small hordes of people and could take place over huge areas in cities and towns.

The ruckus was so extensive and exuberant that towns and cities often sustained substantial damage, so it is more accurate to think of an organized riot than of “football.”

Sure, we all love a good ding-dong and being allowed to freely cudgel our way to grab whatever is serving as the “ball” so we can impress the young lass who is currently the object of our desire, but business owners were often less than impressed by the damage to their properties.

Eventually, money talked, and the riotous players walked. In their stead, except for a brief reappearance in the 17th century, authorities restricted football to the playing fields of public schools.

The two leading public schools at this time (early 19th century) were Eton and Rugby. At Eton, the boys played football exclusively with their feet. 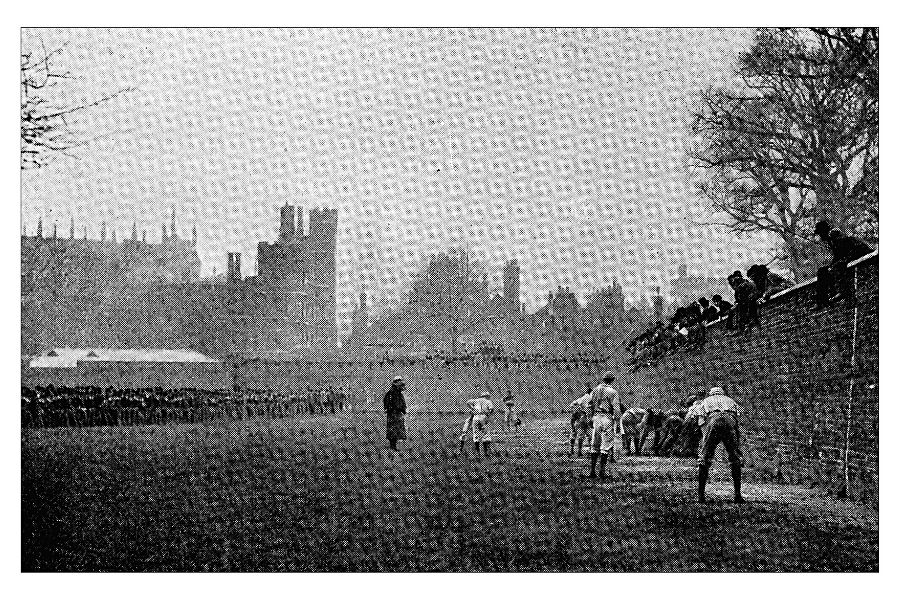 The boys at Rugby played with their feet, but they were also allowed to handle the ball. However, if the ball was in hand, the player holding it had to walk and was prohibited from running. 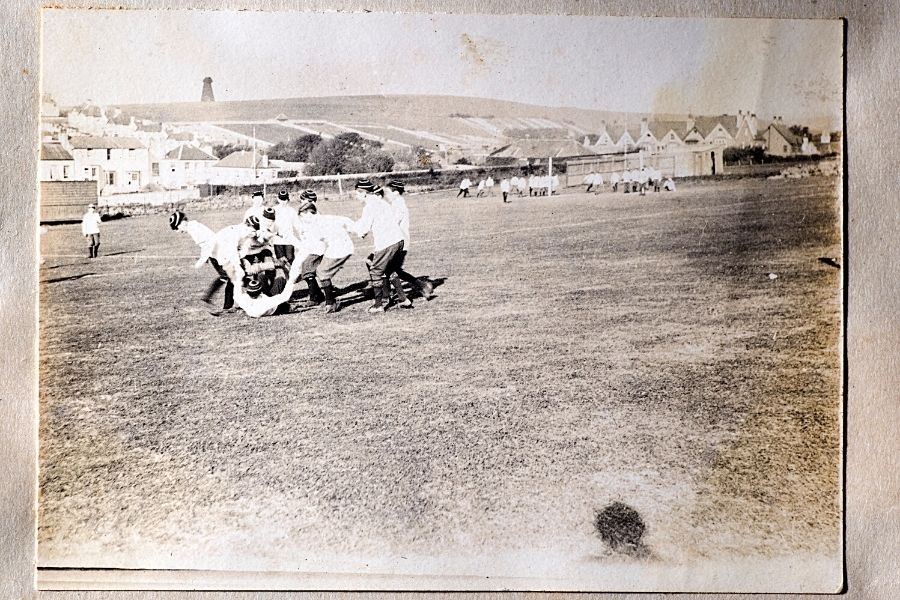 At the Rugby public school, the boys played using their feet, but were also allowed to handle the ball

One day, a rotter and, dare I say, an absolute bounder (wink, wink) called William Webb Ellis took it into his head to disregard the rules and run with the ball in hand!

The resulting glorious brouhaha earned him a sound roughing up on the field, which everyone present thoroughly enjoyed, and thus was born the game of rugby football.

All the weedy, Eton-type schools that played the genteel form of kicking-only football got together and created Association Football, which over time has given us today’s game of soccer. (You know, the one where players fall to the ground at the touch of a feather and roll around like babies.)

All the manly, strapping, Rugby-type schools that played the rougher, tougher, masculine form of football created Rugby Football, changing the shape of the “ball” to an oval, which was easier to throw.

In 1869, Princeton and Rutgers University played a game that today we’d find extraordinary, and not in a good way.

Two teams of 25 players each kicked and hit a round ball with hands and feet, trying to run the ball into either goal area.

In this wild west era of American “rugby,” the rules were whatever the home team made them out to be, which I find a suitably satisfying individualistic and American way of doing things.

Unfortunately, there are always those who decry uncertainty and viscerally crave the strictures of well-defined rules (boo), so colleges like Columbia, Rutgers, Yale, and Princeton got together and hammered out a set of standard rules.

Amazingly, players were still prohibited from carrying the ball even this recently.

The First Appearance of a Modern American Football-like Game

It wasn’t until 1875, following a game between Yale and Harvard, watching officials from Princeton University formulate what would be the beginning of modern American football.

These far-sighted individuals devised a set of rules that, although more closely related to Rugby Football than anything else, had the seeds that allowed the game to become something distinctly American, an all-new sporting experience.

The new rules and practices were quickly adopted by major American colleges across the country, in no small part due to a certain Mr. Walter Camp, a football enthusiast, and Yale player.

His contributions to the development of the sport were so extensive that, in my opinion, he is rightly called “the father of American Football.”

Frequently Asked Questions about Why American Football is Called Football

Why do some countries call football ” soccer”?

Actually, most folks call soccer “football” worldwide, a shortened form of the sport’s complete name, Association Football. “Soccer” probably comes from the “Association” part of the name and is akin to how “rugger” comes from the “Rugby” part of Rugby Football’s name.

Actually, only America calls football “soccer.” A 1980s backlash that began in the UK against America’s increasing use of the term “soccer” to distinguish the game from American Football meant that what was formerly a perfectly acceptable nickname for the sport suddenly became passé, even offensive.

Whether trying to dispossess the player with the “ball” by cudgeling him with a handy club, daintily kicking and feinting a faint like a modern-day Ronaldo, or running head-first into a beefy wall of burly men in northern England, or taking the opportunity to work off some steam on an American gridiron, many sports of very different games have gone under the umbrella of “football.”

However, the one thing they have all had in common is a love of getting an object from point A to point B in a team effort to defeat opponents and carry the day.