Snowboarding is an exhilarating winter activity, but amateurs may be asking themselves the million-dollar question before hitting the slopes, “How do I stop on a snowboard?”

Fortunately, stopping on a snowboard isn’t as difficult as you may think. There are a few tried and true techniques of stopping that you can practice prior to hitting the steeper drops.

While snowboarding can be a lot of fun, once you get the hang of it, safety is still an important factor to consider, as it is with any sport.

These tips should help you when learning the basics of stopping on a snowboard. But as with anything, you will only be able to perfect your snowboarding technique with practice. 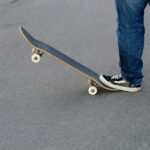 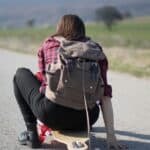 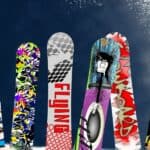 How to Stop on a Snowboard

The proper way to stop on a snowboard involves turning, flexing, and extending. When facing downhill, you can also stop by bending your knees, staying close to the ground, and pressing the heels of your foot into the snowboard, while raising your toes.

Turning, Flexing, and Extending to Stop on a Snowboard

Sitting and sliding isn’t the proper way to stop, but it may be very tempting for an amateur snowboarder to try this technique the first time that they find themselves quickly approaching a tree or another person.

Sure, this may work, but it is NOT the correct way of stopping on a snowboard.

When you are attempting to stop on a snowboard, it is vital to evenly distribute your weight between both feet, so that the following stopping techniques will be effective.

You also need to pay close attention to your turn shape, which has a direct impact on your speed. Flexing down while extending upwards can result in a full stop depending upon the rate of your turns.

Sure, this may sound a little complicated to a beginner, but don’t give up and resort to simply sitting down just yet. There are two other techniques that can help you stop on a snowboard.

The Downhill Method of Stopping

If you haven’t yet mastered the sizes and shapes of your turns and are clueless when it comes to flexing and extending, the downhill stopping method is fairly simplistic.

You will still need to evenly distribute your weight, but you can forget about flexing for the moment. Stoop down low with your knees bent as you press your heels down into the snowboard while lifting up your toes.

As your heels begin to press deeply into the snow, you will find yourself coming to a halt. Just remember that this technique isn’t about flexing your feet.

It involves using the distribution of pressure to bring yourself to a complete stop.

The Uphill Method of Stopping

When you are facing uphill, you will need to distribute the weight of your feet in the opposite manner. Instead of pressing your heels into the snowboard, you should press down on the balls of your toes as you slowly raise your heels.

Yes, you will likely fall down a lot as you practice perfecting your methods of stopping. This is absolutely normal.

Your legs may also begin to develop craps from repeatedly going into the squatting position, which may require you to take a break and do some stretches.

There is no rush when learning snowboard stopping. Take your time, brush off the snow whenever you fall, get back up, and keep trying.

Once you master the downhill technique, the uphill technique will be a breeze. The trick is in knowing what is below you at all times while facing in the uphill direction.

Don’t make the common mistake of trying to stand on your tip-toes, but instead place the pressure on the balls of your toes as you slowly and steadily lift up your heels.

Keep your snowboard in a horizontal position as you continue to face towards the uphill direction. This should make you stop completely.

Frequently Asked Questions about How to Stop on a Snowboard

Is it hard to stop on a snowboard?

Stopping on a snowboard takes practice, but once you get the hang of it, it really isn’t that hard to do. It’s normal to fall several times as you practice stopping, but the most important thing is to distribute your weight evenly between both feet as you master the stopping techniques.

How do I stop snowboarding so fast?

Mainly, you want to keep your knees bent, stay low to the ground, and make good use of your heels and toes when trying to stop or slow down on a snowboard.

Is it easier to stop on a snowboard or skis?

Many of those who are skilled at winter sports claim that skiing is a little easier than snowboarding as you don’t need to sit down to adjust the bindings, it’s easier to take breaks in the middle of your runs, and it’s naturally easier to balance yourself properly while in line if you have both feet to work with.

Snowboarding is a lot of fun, but the very first question a new snowboarder will ask is how to stop.

While these techniques will bring you to a halt, reading about them is only the first step.

The only true way to learn how to stop on a snowboard is to hit the slopes and start practicing!

Plus, read more on how to snowboard so you’ll better prepare yourself for what to expect when engaging in this sport.